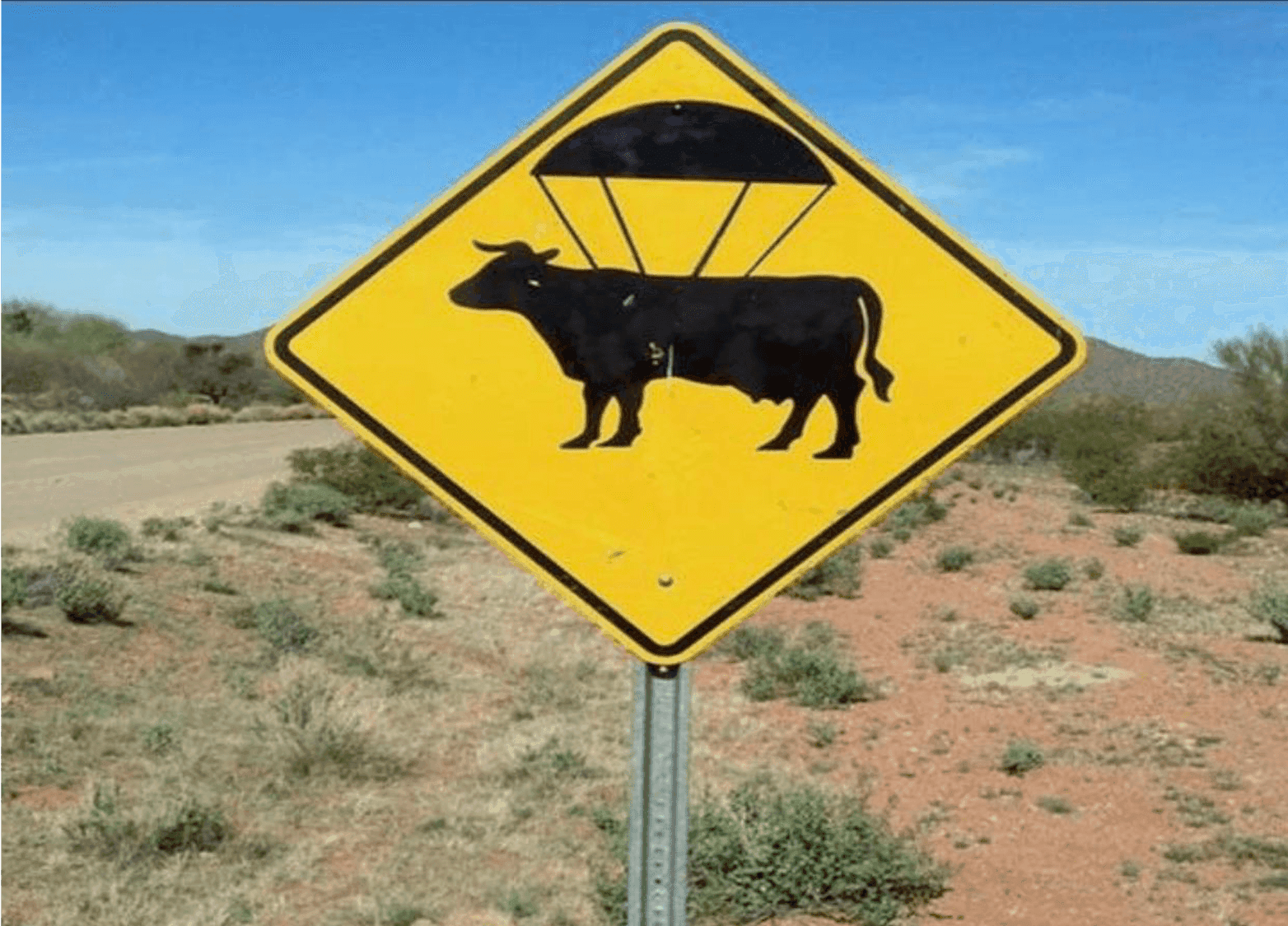 Will a crystal ball ignite a house? Did a drone hit a plane’s wing on takeoff? How about parachuting cows in Arizona? A swimming shark on a highway? Are these widely discussed issues genuine, or are they too wild to believe?

In this post, we will discuss 4 reports that are flying around the Internet. Do you know which stories are true and which are false?

The road sign does exist in Arizona, but it is not an official one. According to the Arizona Department of Transportation, there is an official sign to warn people of cattle on the road. This is how it looks like, similar to the one above but without a parachute:

In reality, there is a different version of an unofficial warning sign about parachuting cows spotted in Arizona. It’s crazy, but it is real!

Wondering if what you saw on the Internet is true? Use Trend Micro Check to find out:

Did a crystal ball cause a house fire in Wisconsin?

It sounds hard to believe, but yes, a crystal ball indeed caused a house fire. The Delton Fire Department posted on their Facebook page, stating that a crystal ball started a fire, with pictures of the burned house included:

It turns out that the crystal ball was near the couch and “in direct sunlight,” thus igniting it. Thankfully, there were no injuries caused by the fire.

“Homeowners should keep items such as crystals, mirrors, glass ornaments, and even bottles away from direct sunlight and away from anything flammable,” the department warned in the statement. Be careful!

Unsure of what you read and see online? Use Trend Micro Check to find the information you need to verify what you see on the Internet:

Is the picture showing a shark swimming down a highway after a hurricane real?

No, no, no. This must be one of the long-existing and reoccurring images on the Internet. As early as in 2011, a website Ego TV posted this picture with a caption that reads:

Why You Shouldn’t Swim After a Hurricane
This picture was taken in Puerto Rico shortly after Hurricane Irene ravaged the island. Yes, that’s a shark swimming down the street next to a car, and this is exactly why authorities in NYC are warning people not to go swimming in flood waters after a hurricane. Sharks go where fish go, and fish go where water goes, and if that water (and those subsequent fish) happen to be right outside your front door, then guess where that freakin’ shark’s going to be?!

The image was not an authentic one. It was digitally edited. The original photo was taken and published in the September 2005 issue of Africa Geographic.

Every now and then, this edited photo circulates on the Internet, especially after a hurricane hits or when there’s a flood. Fact-check organization Snopes tweeted this article again, asking people to stop sharing the fake image.

Find it difficult to tell what’s true from what’s false? Use Trend Micro Check to verify the information that you read online:

Is the video that shows a drone hit a plane’s wing on takeoff real?

Nope. This is another example of long-existing false information on the Internet.

A TikTok video about a drone hitting a plane went viral recently, receiving more than 188 K likes and over 15.6 K shares:

However, the video is not genuine. Visual effects artist Bruce Branit created this clip and uploaded it to his YouTube channel back in June 2015.

It was very realistic, and many people believed that the plane in the video belonged to Southwest Airlines at that time. Southwest Airlines confirmed in an internal message that there was NO such incident of a drone crashing into their airplane. Whew!

Use Trend Micro Check to find the information you need to verify what you see on the Internet:

Were you able to tell facts from fiction? To combat rumors and misinformation, remember you should always check with Trend Micro Check before you share.